All dog owners have probably gone through all the treats on the market in pursuit of snacks to please their most cherished pets. But just because certain treats make your dog happy, it doesn’t mean they’re good for them. In fact, many pet treats pose serious dangers to your dog’s long-term health.

To keep your dogs safe, avoid these eight types of dangerous dog treats: 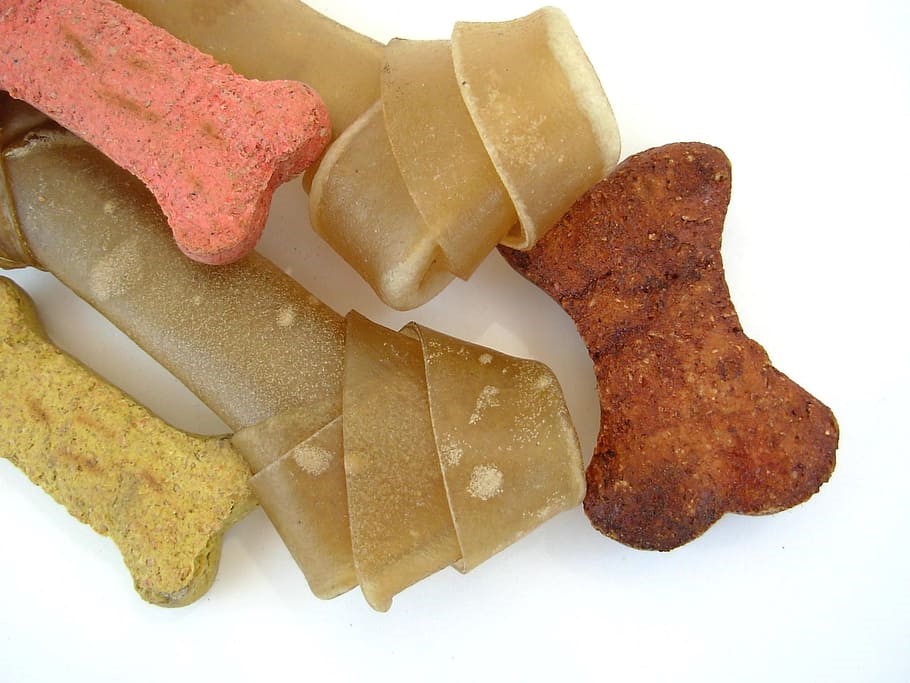 Of course, not all China-made treats are harmful. But, a “Made in China” label should prompt you to scrutinize your options more closely. That’s because the US Food and Drug Administration has linked jerky pet treats to a severe condition called the Fanconi Syndrome (FLS), which could result in fatal kidney failure. Most of the treats in question are sourced from China. Although most reputable pet stores no longer carry these products, they’re still abundantly available online and in some pet supply stores.

As of 2015, there had already been more than 5,000 complaints and over 1,100 canine deaths related to this issue. The FDA’s investigation revealed that some treats contained antibiotics while others were formulated with anti-tremor drugs. However, they have yet to discover the main FLS triggers. 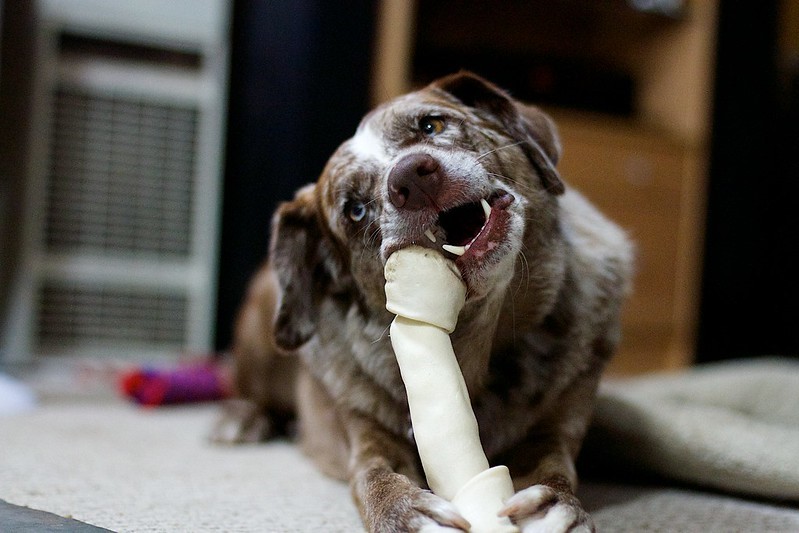 Rawhide is a by-product of the leather industry. It is the discarded second layer of animal skin, which contains very little economic or nutritional value. Because the raw material is so cheap, the treats they are processed into are also some of the most inexpensive options for dog lovers.

Apart from the price, rawhide chews are incredibly appealing because they last so long. The problem is that, power chewer on not, most dogs will inevitably break off parts of the chewy treat. That could cause choking or a serious intestinal blockage. Additionally, before rawhide can become a dog chew, it is processed using a variety of toxic chemicals. Some of those might include formaldehyde, bleach, sodium sulfide, and glue. 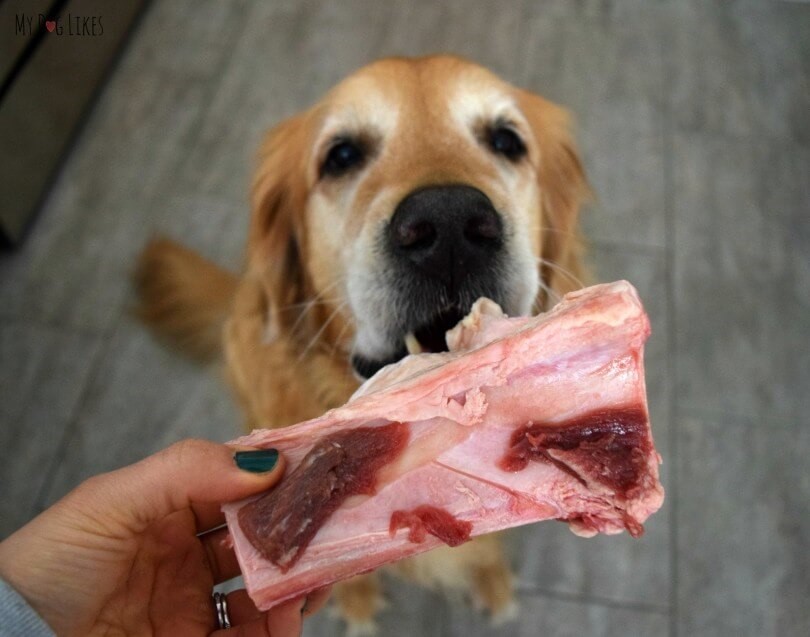 Bones from real animals are often marketed as natural chew toys, which gives many people the impression that they are safe. Undeniably, dogs love bones because they are tasty, mentally stimulating, and address their natural tendency to chew. Additionally, people believe animal bones help develop jaw strength and improve dental hygiene.

While all that is true, real animal bones pose a danger to your dog’s health. Raw bones can be contaminated with harmful bacteria like listeria, e. coli, and salmonella. To kill off any pathogens, bones need to be cooked, which causes them to be more brittle. Brittle bones can splinter and hurt your dog’s mouth. Or, the bones could break into pieces, which could cause choking and intestinal damage. 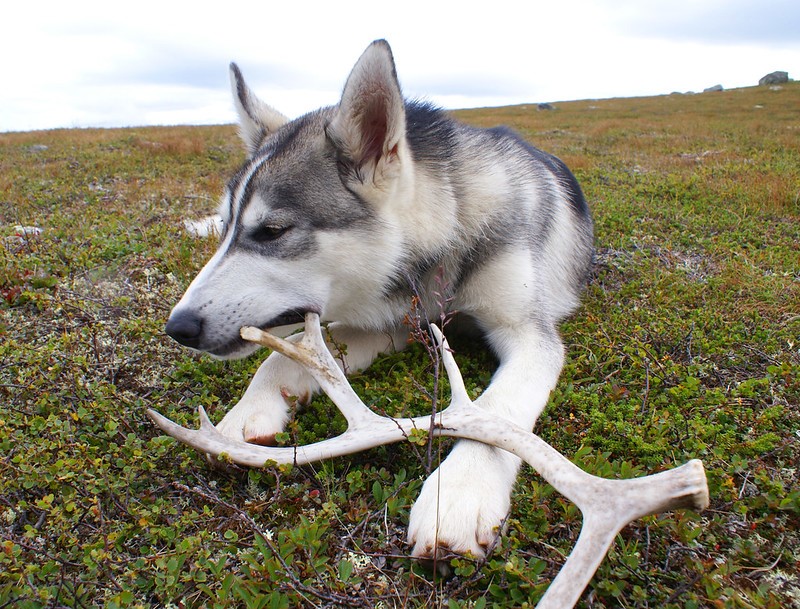 Many other animal parts are used as dog treats or chews. They’re usually by-products of the meat production industry. Among the most popular options are hooves and antlers. These are natural products that, when processed correctly, can be a nutritious and beneficial chew toy for our special pets.

The danger in these types of chews is that they’re hard enough to crack or break your dog’s teeth. They could also splinter, which can injure your dog’s mouth, block their intestines, or puncture their gut. Additionally, they could be serious choking hazards. If you choose to use this type of dog chew, buy it from a reputable company, make sure you get the appropriate size for your dog, and never give it unsupervised. 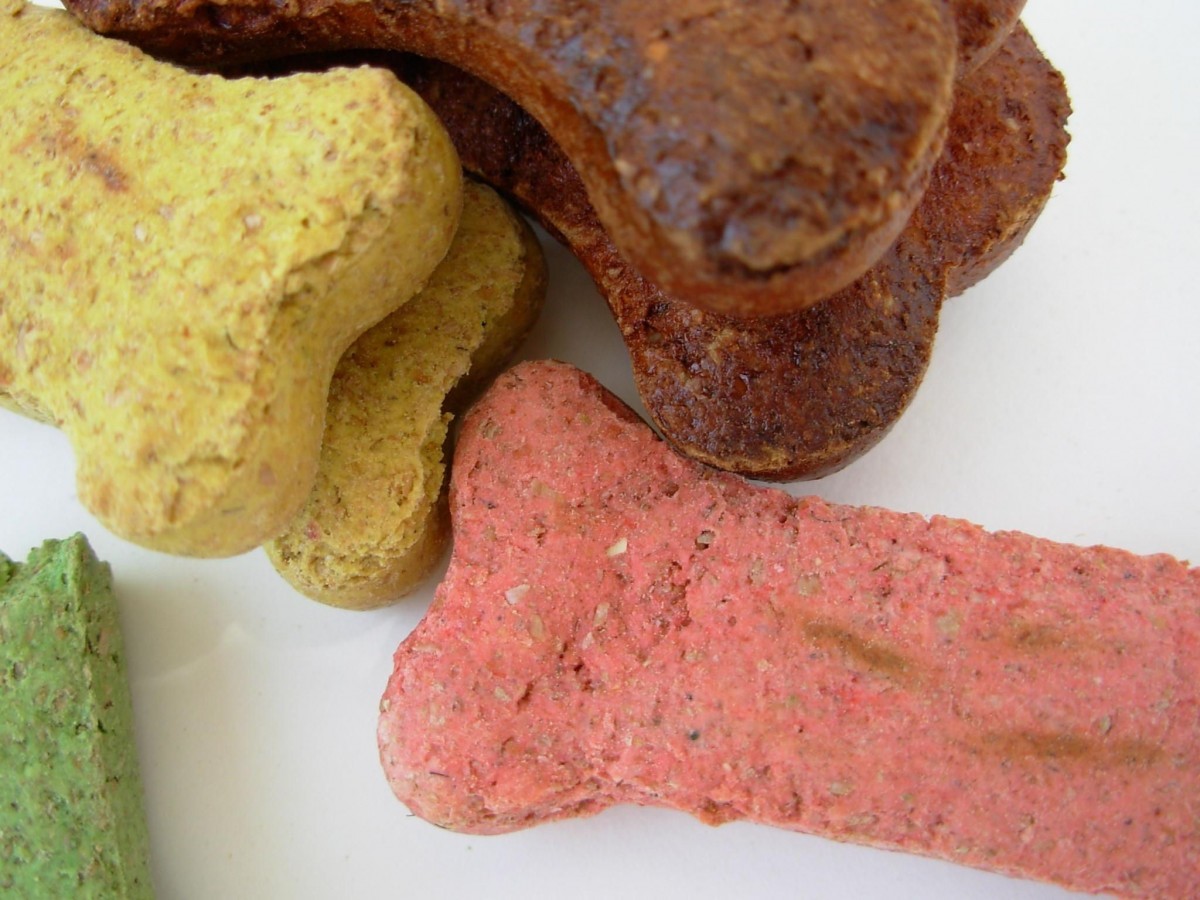 Several chemicals used in dog food and treats have been linked with canine cancer. Among them is a food additive called Red#40 (known in the UK as E129 – Allura Red) used to obtain brighter, more vivid colors that make the treats look more appealing. This particular artificial food dye has been banned in several European countries, including the UK, France, Austria, Norway, and Finland.

Another cancer-causing agent used in dog biscuits and other treats is a chemical antioxidant called Butylated hydroxyanisole, which is commonly cited as BHA or E320. This preservative was widely used in cosmetics, but international regulations now restrict its use. Although it is still legal to use it in the US, the NIH has listed it as a carcinogenic substance. 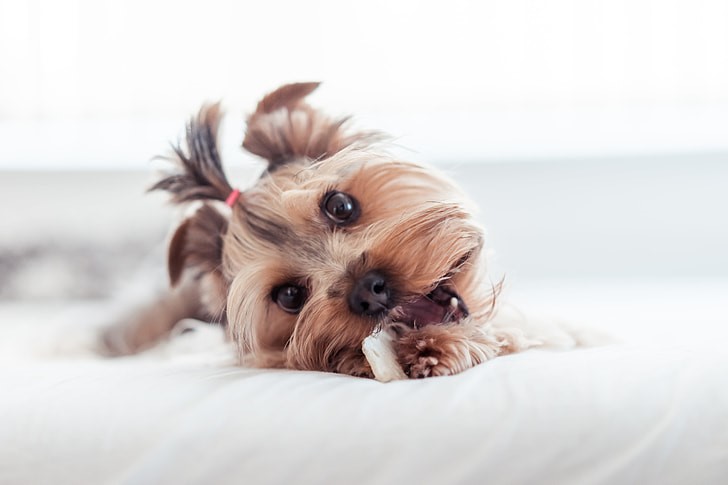 Many manufacturers add sugar to dog treats to improve the taste. This is especially true when cheap and low quality ingredients are involved. But, sugar shouldn’t have a place in any dog’s diet. Not only does it cause unhealthy weight gain and dental problems, but also serious illnesses like diabetes.

A more serious concern than simple sugars are artificial sweeteners. Substances like sorbitol and xylitol are even more dangerous for dogs. The use of sorbitol in both human and animal food has been controversial. For dogs specifically, it is known to cause stomach problems. On the other hand, xylitol is poisonous and can cause seizures, clotting problems, and even death. 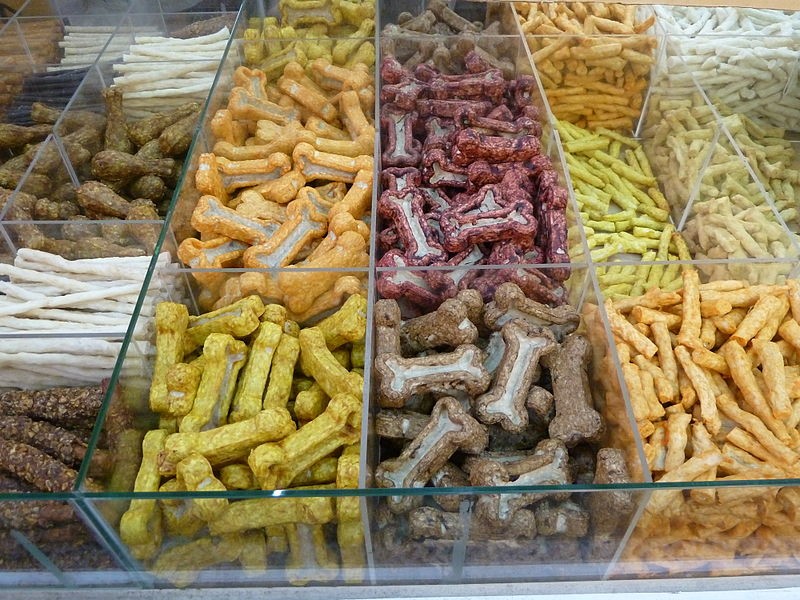 Many dog food and treat manufacturers use inferior quality starch options as fillers in order to lower production costs. That has propelled the trend towards grain-free and gluten-free alternatives. Instead of using grains like wheat, corn, and rye, grain-free pet treats use complex carbohydrate sources like sweet potatoes and tapioca.

Unless your dog has allergies and sensitivities, switching to a grain-free or gluten-free diet isn’t absolutely necessary. But, it’s essential that you avoid kibble and treats that contain too much starch. Instead, opt for high quality treats that use complex carbohydrates or are protein-based. 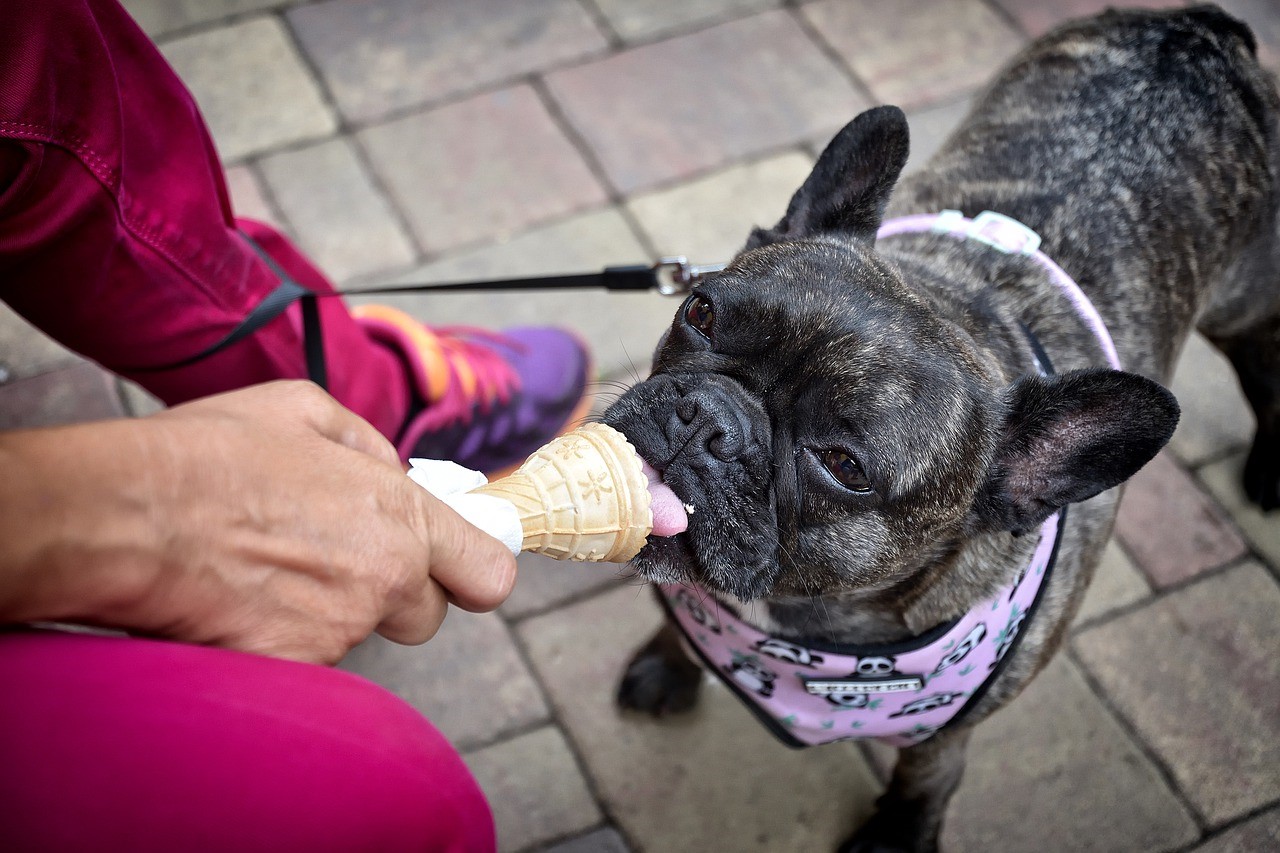 Some human foods can get dogs really excited. The best part is that they could be inexpensive and easily accessible treats. Besides, it’s difficult to resist tossing a few pieces of your own snack when your dog is literally giving you puppy-dog eyes. Although many human foods are safe for dogs, some are toxic and could make your dog severely ill.

Among the foods you should never give your dog are chocolates, grapes, and nuts. You should also avoid anything that might contain garlic, onions, and chives. Be especially careful during the holidays when they might have easy access to food spreads.

As responsible pet owners, it is your duty to be mindful of the food and treats you allow your dogs to consume. Many options you can find in almost any pet store today can actually make your dog sick. But, as long as you make a habit of checking the ingredients lists and are cautious with your choices, you should be able to find delightful treats and snacks that don’t pose any danger to your beloved pets.